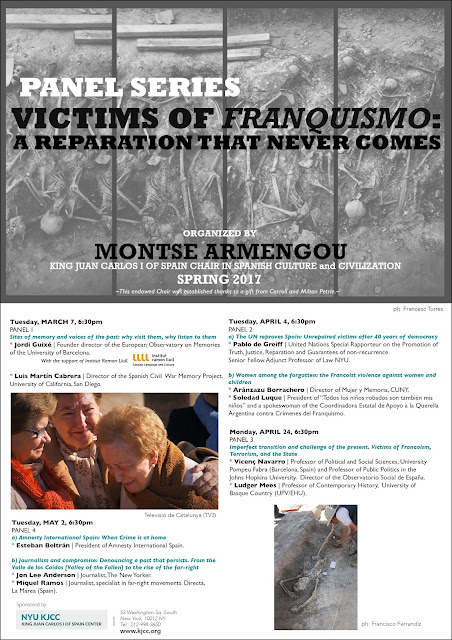 
This series weighs the effects of violent repression during forty years of Franco’s dictatorship, even as we assess the persistence of official silence and a crisis of national memory through the last forty years of Spanish democracy. This series of conversations consider how instruments of remembering and reparation have emerged beyond state sectors, and in the absence of government policies, opening important breaches of recovery and reclamation for victims and their descendants.
In Spain the systematic violation of human rights during decades of the Franco Dictatorship remains an untreated social wound. Mass graves, assassinations, torture, kidnapping, child slavery, and state terror of those decades remain a difficult legacy for Spanish democracy and collective memory.
Though these violations have been recognized and denounced by international organizations such as the UN and Amnesty International, the state’s failure to create mechanisms for truth, reconciliation, or reparation, has forced extraordinary interventions by civil society. Journalists, civic organizations, voluntary associations, academic researchers, documentarians and filmmakers have helped to collect material evidence, historical records, personal testimonies that reveal the cost of this long period of dictatorship.
~This endowed Chair was established thanks to a gift from Carroll and Milton Petrie.~

General Francisco Franco buried thousands of people in the Valle de los Caídos (Valley of The Fallen), a monumental memorial constructed in the municipality of San Lorenzo de El Escorial by his government. The place is a symbol of the dictatorship. The UN has suggested that the site be transformed into a museum.
“I'll get you out of here, Abuelo!” (directed by Montse Armengou and Ricard Belis in 2013) invokes the solemn promise made by Joan Pinyol, the grandson of a Republican soldier whose body was disinterred from the grave where he was buried and forcibly transported to the Valle de los Caídos without the consent or even the knowledge of his relatives.
Today hundreds of families like the Pinyols, whose relatives are buried in the Valle de los Caídos, are fighting for the right to remove their loved ones and bury them near their homes. But there are many logistical and political obstacles involved in this reclamation. By telling this story, the filmmakers uncover intimate and public struggles over political memory in Spain.
Q&A with Montse Armengou to follow.
This endowed Chair was established thanks to a gift from Carroll and Milton Petrie.
With additional support from the Abraham Lincoln Brigade Archives (ALBA).
>>Check our Facebook event!!
Publicat per Jordi Grau a 20:37